Integrative Techniques and the Multidimensional Performer

The Multidimensional Performer: Integrating Techniques for Voice and Dance

Collaborative Workshop with Robin Kish for students in Dance Kinesiology

An Introductory Weekend for Teachers

Discover the Secrets of Great Technique–In Your Own Anatomy

Workshop for MTEA conference by Jennie Morton and Joan Melton

A Series of Practical Workshops for Singers

Workshops for students in theatre, vocal performance and dance

University of Nebraska at Kearney

Workshops for graduate and undergraduate students in Musical Theatre, Acting, and Vocal Performance

Designed to prepare performance specialists to work across boundaries in theatre, music and dance 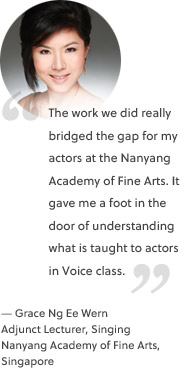