The Technical Core: An Inside View 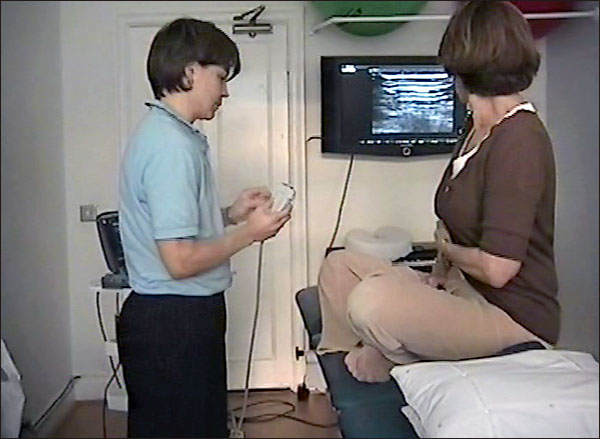 (Part of a longer article written for the VASTA Journal 2009)

In January 2007, physiotherapists Ed Blake and Jane Grey introduced ultrasound imaging (USI) of abdominal muscle activity while voicing to workshop participants at a conference on Performance Breath, at the Royal Academy of Dramatic Art, London. I was among those present and immediately saw USI as a powerful tool for clarifying certain physical actions included in the training of actors, singers and dancers.

[Ed Blake and Jane Grey] demonstrated... the advantages of Real Time Ultrasound in assessing abdominal muscular patterns while voicing, and consequently the effect of poor support... This Real Time approach is ground breaking in its speed to diagnose and see the problems (Hawkins 2007, 8).

During the workshop both presenters, working with volunteers, focused on the transversus abdominus, to be sure it was firing in normal conversation, the thinking being that if the obliques were working without the transversus, there would likely be compensatory muscle contractions elsewhere in the respiratory-phonatory system to effect the needed respiratory drive to produce the desired voicing:

The overriding clinical presentation is of overactivity of the sternocleidomastoid musculature and secondary tightness of the suprahyoid soft tissue resulting in an elevated larynx in resting position and poor cricothyroid mobility (Hawkins 2007, 8).

This was particularly interesting, in that it seemed to verify Zemlin's suggestion (1988) that, because of their location and fiber direction, transversus would have more to do with exhalation, and obliques with postural stability of the torso in space. However, as I teach voice in a movement-related context, I wanted to know how abdominal muscles responded and performed "for real," in other words, in physically vigorous circumstances. So after the conference I made an appointment with Jane, put myself under investigation, and saw - perhaps for the first time ever - the abdominal activity for laughing, crying, shouting and other extended voice use, as well as for speaking and singing in a variety of physical positions.

Following that initial session, Jane and I conducted pilot studies to determine the specifics of abdominal activity for nine other subjects. Seven of those were trained performers; two were fit adults with no prior voice training. We also looked at the abdominal activity of an advanced trumpet player, while playing, and found it to be highly similar to that observed in the breath management of singers.

Once an optimal solution for visualizing and recording our sessions was established, we were able to document an initial set of images, on which to base a more nearly complete set of observations. Of course, more comprehensive research involving a large cross section of populations will be required before we can generalize these and/or any other findings. Nevertheless, at least two very interesting observations may be mentioned at this point:

While this is only a preliminary set of observations based on a small sample size, it opens the door to an almost unlimited variety of full-scale projects and collaborative designs. In addition, it calls attention to the physicality of voice work and to the extraordinary range of vocal sounds that are essential to the actor's repertoire.

Although we have examined only one part of the total instrument, focusing on the physical core is both critical and timely, especially in the training of musical theatre performers. When the abdominal/pelvic core is overlooked, the actor/singer works without a foundation, and activity in the upper body - shoulders, chest, neck and head - frequently attempts to compensate for a lack of awareness and use of the lower torso.

In a recent workshop for voice professionals, a highly experienced participant commented, "In all my training no one ever mentioned the abs, and the difference is huge!" Indeed it is huge, and "natural," and can release the performer from a huge amount of stress.

Again and again I have found that intervening at the level of the torso to correct breathing and support problems has resulted in the vocal fold and resonance problems either disappearing altogether, or being able to be resolved quickly and easily. For example, problems with jaw and tongue root tension are invariably relieved by correcting insufficient and inadequate air flow as a vital first stage. These two problems resolve very quickly (and stay resolved) once a singer has been introduced to some Accent Method work to free up their air followed by work on postural alignment and abdominal support.

The Accent Method was developed by Svend Smith in Denmark for use in voice therapy, and is a brilliant addition to the technical tools of a voice coach. It has been adapted by Janice Chapman and other outstanding teachers (for example, Mark Meylan, Mel Churcher, and Gillyanne Kayes) to help singers and actors access the natural functioning of the abdominal muscles. Repeated rhythmic patterns (with accents) are employed, first with unvoiced fricatives, then with other sounds - rather like staccatos in rhythm - to wake up and train the abdominal muscles to perform their role in the complex symphony of physical actions that contribute to efficient breath management - for life, as well as for performance.

One of the most valuable skills gained in an Accent Method approach is the ability to let go quickly, or to release the abdominal muscles - albeit only one in some strenuous positions - so that the need for an upper chest "top up," or "catch breath," is eliminated. In her excellent section on breathing in Singing and the Actor, Gillyanne Kayes discusses elastic recoil. She says:

A very wise singing teacher told me during my training that the secret of breathing in was to breathe out... [Exercises based on the Accent Method] engage the muscles of active expiration, and they will help you to release the abdominal wall so that you can breathe in fast and efficiently.

In addition to releasing stress in the upper body and solving technical problems, use of the abs is key to our experiencing a character as a whole person, rather than as a "talking head." Mel Churcher, who coaches and directs the gamut of theatre venues, may ask an actor who is working on a TV monologue simply to place a hand on the abdomen the second time through the piece. That simple action changes the sound and impacts the communication immediately, so that both actor and coach are working at a different level very quickly.

Work with the abs can be scary initially for some students, especially if the belly has been held habitually. Not only do emotions release, but the sound of the voice - and, therefore, of the person - changes instantly. So if "your" voice is very different from the sensual, deep, rooted quality that is likely to pour forth, you may be shocked. And you may not like what you hear or feel at first. In my own experience, change is often more acceptable in a class than in a private lesson, because classmates invariably respond with excitement and support, as they provide immediate feedback for one another.

Along with abdominal release and engagement, it is essential that the rest of the instrument be functioning efficiently for safe and effective use of voice. Space in the throat, or what I often refer to as an open pipe, is critical. By that I do not mean held space, or stiffness, but gentle space. The beginning of a yawn is often a useful route to finding that space, because it automatically raises the soft palate, widens the pharynx and lowers the larynx. This is a classical position, of course, and certainly there are other "set-ups" for other vocal qualities. However, what is necessary initially is to open the channel, to remove the blocks, and in nearly all vocal exercises, spoken or sung, I listen for that space.

Lest the thought occur that I am suggesting vigorous abdominal movement for any and every phrase, what we all know is that experienced performers suit the action to the material and the medium. Interestingly enough, so do non-performers whose bodies are fit and functionally normal! What the untrained performer tends to do, however, is to close the throat, or constrict, as the vocal action becomes more intense, whereas the skilled performer learns to do the opposite.

My immediate interest in the use of ultrasound imaging sprang from a desire to know the truth about what we do and what we teach. I am drawn to technical training that is clear, physiologically sound, and not laden with extra tactics that may or may not be imperative. Voice training has been fraught with myths, and some of those myths may have been useful at times. Yet, when we are able to sort out what actually happens in one aspect of the technical process, we are then freed to release the extras and to make subtle adjustments in our understanding of the whole mechanism.